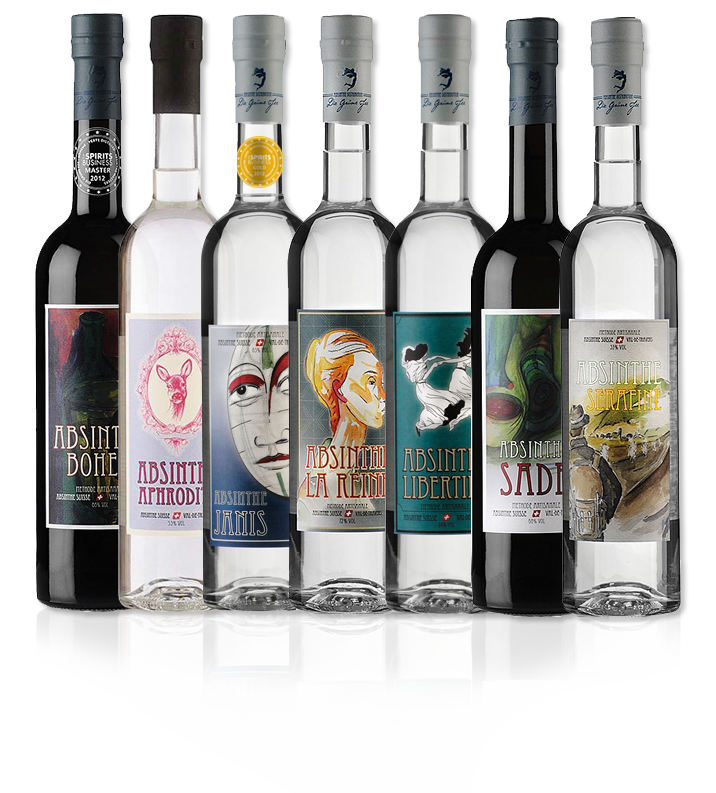 It was said on October 7, 1910, when the prohibition of absinthe came into force in Switzerland - and deprived the small Val de Travers in the Swiss Jura of the product that had become world famous as the fuel of the poets and thinkers of the European "fin de siècle" was. While artists and creatives praised pure absinthe as an inspiring muse and "green fairy" to heaven, cheap copies adulterated with chemicals and industrial alcohol had made him the dangerous mass drug that was then banned. But in secret, the traditional production of the original absinthe lived on in his home tale..

This absinthe La Fée Verte is made with great care from local plants from the Val-de-Travers. The production is made according to traditional methods and old recipes from the Belle Epoque. Serving suggestion : 1 part absinthe 3-4 parts ice water - With sugar

On the nose, fresh aromas of mint followed by a bitter note.

Initially pleasantly sweet, smooth and mellow. This flavour areharmoniuosly complimented by a long-lasting finish with a strong vermouth taste.

An absinthe as it was before prohibition: a strong green colour, with a strong and bitter vermouth taste, bold and extremely substantial. Enjoy Absinthe Boheme with ice cooled water.

Made according to traditional distillation methods and an old recipe dating back to the Belle Époque. Boheme was given Gold for best absinthe by the Spirits Business Masters awards. Serving Suggestion: 1 part Absinthe 3-4 parts ice cold water - with sugar

Absinthe Janis is handmade by Francoise Bovet from the Distillerie Absinthe Bovet La Valote for Die Grüne Fee brand by Swiss Craft Distillers, according to traditional methods of distillation dating back to the Belle Époque. The recipe is composed of up to 10 medicinal plants native to the Val-de-Travers region. Janis won a Gold medal for Best in its class at the Spirits Business Master Awards. Serving Suggestion: 1 part Absinthe 3-4 parts ice cold water - with sugar

The nose is fresh with a variety of herbal notes and an intense vermouth tone.

Strong in taste but well balanced with a powerful wormwood scent and a prolonged bitterness. Remarkably smooth, despite the high alcohol content.

With its appealing bitterness like in the times of the Belle Epoque, this absinthe can be drunk with sugar according to the old ritual, which contributes to the charm and popularity of this mythical drink.

Françoise Bovet, Absinthe Bovet
"Absinthe represents my whole life," says Willy Bovet. And that's quite true, because he has been burning since 1968 and been " almost " caught several times. It was almost too much for him, and in 2005 he envisaged ending his love affair with the fairy once and for all, but then decided to take up the challenge of legalisation. It is worth visiting his distillery just to hear him talk about the good old days. With radiant eyes, he talks about the great moments of his passionate relationship with the green fairy. A love that still continues, he now produces several different types of absinthe. "La Tradition", "Le Chat", "Septante7", "Nostalgie" and "Bole Dance". Willy Bovet is one of the few to collect his own herbs.

This absinthe "La Fée verte" is made with great care from local plants from the Val-de-Travers. Production is carried out according to traditional methods and old recipes dating back to the Belle Epoque. Suggestion : 1 part absinthe 3-4 parts ice water - sugar free

Powerful, with a clean taste and distinct herbal aroma. Well-balanced.

Smooth and full-bodied. Sweet and spicy at the same time.

A wonderful composition of perfectly balanced herb with a subtle taste of alcohol due to the high content of botanicals. Well-rounded flavour, elegant, refined and well-structured. Extremely substantial.

La Valote Martin Distillery
On the 1st March 2005, Francis Martin also decided to make his project public. He had been secretly distilling his grandfather's recipe for a long time. The recipe and the love of the elixir have stayed intact for Francis Martin since his first attempts in 1972. His recipe has not changed because his customers still appreciate it. The elderly always say: "His absinthe reminds them of the drink of their youth".

The love of a product, a history, a region: this is the secret of La Valote Martin absinthe, distilled by hand in Boveresse, Val-de-Travers (Switzerland). A beautifully bitter "bleue", whose aroma is composed of ten plants (grand and petite wormwood, melissa, hyssop, peppermint), grown mainly in the fields of the region.

Absinthe Sade is made by master distiller Rene Jean-Jacquet, a true “Verte” absinthe well balanced and powerful. This "Die Grüne Fee" is carefully handmade from plants native to the Val-de-Travers, which gives it a natural green colour and outstanding flavour.

The Initial sweetness, followed by a warm and strong bitterness. Rich full bodied and well structured. Very complex and harmonious long finish with a subtle bitterness

An absinthe with strong flavours and complex aromas , this is a well balanced and powerful absinthe. A true “Verte” made from twelve different herbs.

This Absinthe "The Green Fairy" is made with great care from local plants from Val-de-Travers. The production is done according to traditional methods and with old recipes from the times of the Belle Époque. Serving suggestion: 1 part Absinthe 3-4 parts ice cold water - no sugar

Mild and smooth, with a harmonious base note with intense notes of wormwood. The Grande wormwood, dominates and slightly numbs the tongue. Tangy and fresh without a drop of bitterness.

A traditional absinthe with a predominant flavour of wormwood and anise. Fresh and spicy at the same time. A true “La Bleu” for connoisseurs with excellent taste

La Valote Martin Distillery
On 1 March 2005 Francis Martin also decided to go public. He had been secretly distilling his grandfather's recipe for a long time. Nowadays he produces three sorts of Absinthe: two 54% and one 72%, the latter with a special label which is an old illustration from 1896. Francis Martin's recipe and love for the elixir have remained unchanged since his first attempts in 1972. His recipe has remained the same, because his customers still like it. Older people always say: "His Absinthe reminds them of the drink they drank when they were young".
Its secret: the love of a product, of a story and of a region. Distilled in Boveresse (Switzerland), this crystal clear Absinthe has an exquisite flavour. Its aroma is made up of 10 different herbs (grande wormwood, petite wormwood, Melissa, hyssop, peppermint), grown, for the most part, in the Valley of Val-de-Travers. This is the region where the “Green Fairy” was first born in 1760. The production of Absinthe (plant cultivation, drying and distillation) has largely contributed to the region’s economic growth.

This "Die Grüne Fee" is an artisanal absinth carefully handmade from plants native to the Val-de-Travers. The distiller uses just traditional methods of distillation, and refers to recipes that date back into the Belle Époque. Serving suggestion: 1 part absinthe 3-4 parts ice-cold water - no sugar.

The initial sweetness is followed by a pleasantly bitter note. Wormwood and anise both slowly unfold their flavours. Dry and long-lasting finish with a slightly numbing sensation on the tongue and the palate.

Absinthe Serafine is pleasantly smooth with a strong finish. Contains more of everything and is still smooth and mild. Without the typical, powerful herbal flavour. A classic “Bleu” made from an old recipe.

René Jeanjaquet Absinthe
Already early in the morning there is a lovely smell of absinthe in the air. René Jeanjaquet is well aware of the fact that the different herbs unfold their scent best in the pure morning air. This distillery is rather difficult to find, which reminds us a little of the time when the drink was illegal.

People whisper – presumably because they were used to it in the old days. The work is done early in the morning, in winter when the snow is still hard and icy, or in summer, long before the sun has reached its zenith and people feel inclined to sit down on a terrace to taste the local “bleue”, the blue spirit. A genuine distillery of times gone by.